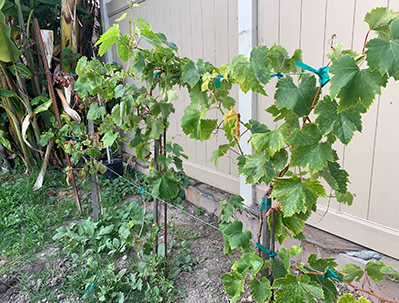 Mission vines that are about to be planted in the
Paul Fountain Cal Poly Teaching Vineyard.

The Wine and Viticulture (WVIT) Department has partnered with the Wine History Project of San Luis Obispo County to help unearth the history of local viticulture through The Mission Vine Project.

The project will tell the story of California’s first wine grape, often referred to as the “Mission” grape since the cuttings were planted by Spanish missionaries in the late 1700s.

The Mission grape, the earliest known grape cultivated in California, was brought by ship from Spain. Almost five centuries later, it has been identified as Listan Prieto, a red grape believed to have originated in the Castilla-La Mancha region of Spain. The vines arrived in Mexico around 1540, and in the 1620s, cuttings were transported north to be planted in Spanish territory, now recognized as the state of New Mexico.

The Mission Vine Project was brought  to the attention of the Wine History Project by local grape enthusiast Len Hoskins, who partnered with Mike Imwalle, chair of the California Missions Foundation and associate executive director of Cultural Resources at the Santa Barbara Trust for Historic Preservation,” said Libbie Agran, founder of the Wine History Project. Hoskins has been propagating Mission vines for several years and has cultivated vines from the direct descendant variety of Mission vine.

Hoskins donated eight Mission vines to the Wine History Project. Vine samples were sent to Foundation Plant Services at UC Davis to ensure the vines are healthy and ready to be grafted over.

The mother vine at San Gabriel Mission, from which cuttings were taken, died several years ago.

“These vines are some of the only surviving clones from the original Mission vine and have been propagated over the last 20 years, making this project even more significant” Agran said. “Cal Poly was identified as the perfect partner for planting the historic  vines. We are both actively working to bring wine and viticulture education to our local community.”

Educational exhibits are planned to accompany the vines and provide a brief history of the Mission grape, detailing its journey with Franciscan missionaries throughout California.

Agran established the Wine History Project in 2015 to study the land, microclimates, grape varietals, growers and winemakers who have shaped the wine history of San Luis Obispo County. The project is staffed by historians and museum professionals who collaborate with a diverse group of advisors and local wine industry pioneers to document and preserve the area’s unique wine and food history.

The Mission Vine Project is seeking collaborators who may be interested in donating materials and funds to support the Mission vineyard. The vineyard is slated to be planted at Cal Poly in the spring of 2021.